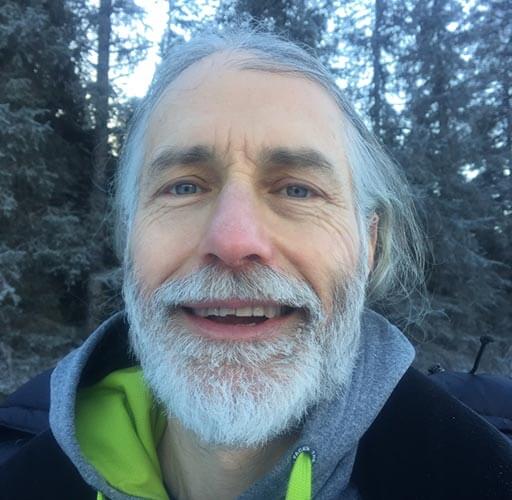 Jonathan first came to Alaska “for the summer” in 1989 — hitchhiking here from Lawrence KS, with a borrowed backpack. After spending a few summers in Alaska, he sold everything that wouldn’t fit in a Subaru, and moved here for good in 1996, with “Alaska or Bust” painted on the luggage carrier. At 19 he took his first solo backpacking trip to the Middle East and more recently he and his wife spent 4 months in Kazakhstan, including backpacking in the Tien Shan Mountains. So far, his travels have taken him to twenty-something countries, with lots of hiking and camping as far North as Alaska’s Brooks Range, and as far south as Egypt’s Eastern Desert. Here in Alaska, Jonathan has lived in a tent, a car, a wigwam, a yurt, and a tiny cabin in the bush (with his wife and two dogs). But, for the past 13 years, he has been putting down deep roots in Girdwood. After so many miles of hiking, running, paddling and peddling Southcentral Alaska, he has discovered that the ultimate adventure challenge is raising a little guy! When not actually in the outdoors, Jonathan likes to read about natural history and other people’s adventurers. He has guided kayakers in Prince William Sound, science students in the Kuskokwim River Valley, Boy Scouts canoeists in Florida, and people who really needed some peace and quiet in the parks of Anchorage. He is a NOLS-certified Wilderness First Responder, and holds a Bachelor’s degree in Philosophy, so he is always happy to share his philosophical contemplations on Alaska’s trails and trees and chirping birds. He was hooked on this wild and beautiful place from the first day, and still and still is, and still loves to share it with visitors — but he also loves to hear YOUR stories and observations. He has been working with AP since 2016.